A Guide to Analyzing Python Performance

While it’s not always the case that every Python program you write will require a rigorous performance analysis, it is reassuring to know that there are a wide variety of tools in Python’s ecosystem that one can turn to when the time arises.

Analyzing a program’s performance boils down to answering 4 basic questions:

Below, we’ll dive into the details of answering these questions using some awesome tools.

Let’s begin by using a quick and dirty method of timing our code: the good old unix utility time.

The meaning between the three output measurements are detailed in this stackoverflow article, but in short

You can get a sense of how many cpu cycles your program used up regardless of other programs running on the system by adding together the sys and user times.

If the sum of sys and user times is much less than real time, then you can guess that most your program’s performance issues are most likely related to IO waits.

Our next technique involves direct instrumentation of the code to get access to finer grain timing information. Here’s a small snippet I’ve found invaluable for making ad-hoc timing measurements:

Here’s an example use of the snippet:

I’ll often log the outputs of these timers to a file in order to see how my program’s performance evolves over time.

Line-by-line timing and execution frequency with a profiler

Robert Kern has a nice project called line_profiler which I often use to see how fast and how often each line of code is running in my scripts.

To use it, you’ll need to install the python package via pip:

Once installed you’ll have access to a new module called “line_profiler” as well as an executable script “kernprof.py”.

To use this tool, first modify your source code by decorating the function you want to measure with the @profile decorator. Don’t worry, you don’t have to import anyting in order to use this decorator. The kernprof.py script automatically injects it into your script’s runtime during execution.

Once you’ve gotten your code setup with the @profile decorator, use kernprof.py to run your script.

The -l option tells kernprof to inject the @profile decorator into your script’s builtins, and -v tells kernprof to display timing information once you’re script finishes. Here’s one the output should look like for the above script:

Look for lines with a high amount of hits or a high time interval. These are the areas where optimizations can yield the greatest improvements.

How much memory does it use?

Now that we have a good grasp on timing our code, let’s move on to figuring out how much memory our programs are using. Fortunately for us, Fabian Pedregosa has implemented a nice memory profiler modeled after Robert Kern’s line_profiler.

First install it via pip:

(Installing the psutil package here is recommended because it greatly improves the performance of the memory_profiler).

Like line_profiler, memory_profiler requires that you decorate your function of interest with an @profile decorator like so:

To see how much memory your function uses run the following:

You should see output that looks like this once your program exits:

A little known feature of line_profiler and memory_profiler is that both programs have shortcut commands accessible from within IPython. All you have to do is type the following within an IPython session:

Upon doing so you’ll have access to the magic commands %lprun and %mprun which behave similarly to their command-line counterparts. The major difference here is that you won’t need to decorate your to-be-profiled functions with the @profile decorator. Just go ahead and run the profiling directly within your IPython session like so:

This can save you a lot of time and effort since none of your source code needs to be modified in order to use these profiling commands.

A memory leak can often occur in your program if references to objects are held even though the object is no longer in use.

The quickest way to find these “memory leaks” is to use an awesome tool called objgraph written by Marius Gedminas. This tool allows you to see the number of objects in memory and also locate all the different places in your code that hold references to these objects.

To get started, first install objgraph:

Once you have this tool installed, insert into your code a statement to invoke the debugger:

Which objects are the most common?

At run time, you can inspect the top 20 most prevalent objects in your program by running:

Which objects have been added or deleted?

We can also see which objects have been added or deleted between two points in time:

What is referencing this leaky object?

Continuing down this route, we can also see where references to any given object is being held. Let’s take as an example the simple program below:

To see what is holding a reference to the variable x, run the objgraph.show_backref() function:

The output of that command should be a PNG image stored at /tmp/backrefs.png and it should look something like this: 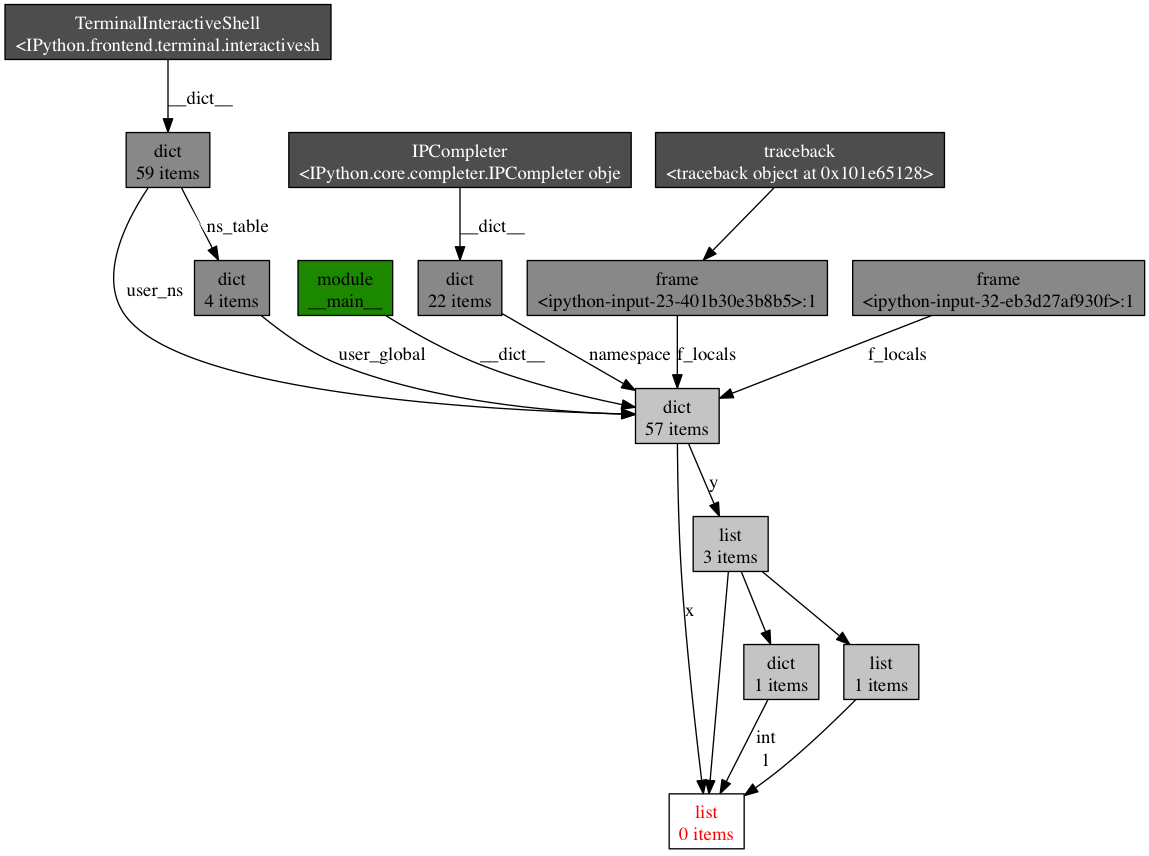 The box at the bottom with red lettering is our object of interest. We can see that it’s referenced by the symbol x once and by the list y three times. If x is the object causing a memory leak, we can use this method to see why it’s not automatically being deallocated by tracking down all of its references.

So to review, objgraph allows us to:

In this post, I’ve shown you how to use several tools to analyze a python program’s performance. Armed with these tools and techniques you should have all the information required to track down most memory leaks as well as identify speed bottlenecks in a Python program.

As with many other topics, running a performance analysis means balancing the tradeoffs between effort and precision. When in doubt, implement the simplest solution that will suit your current needs.

Hey there! I'm Huy and I do research in computer vision, visual search, and AI. You can get updates on new essays by subscribing to my rss feed. Occassionally, I will send out interesting links on twitter so follow me if you like this kind stuff.